I was asked for another update on the triplets so here we go.
The babies are 10-1/2 months old and this is the stage that I absolutely love, when they have their own personalities and love to see Grandma and Auntie Nona.
They are finally sitting up and still army crawling although they get up on their knees and take a couple of crawls, especially Anna and Justin.
The other day when we came, Connor came army crawling across the living room towards me and was so happy to see me.  We hardly have time to get our coats off and settled in before they want to be picked up.  So cute, just melts my heart.  It's very hard when all three want to be picked up and there are only two of us.  So you take the ones that are the most in distress.  Lol...Or try to get down on the floor with them which isn't easy anymore.
So Connor is our laid back baby, Justin is our wild child and Miss Anna is our strong willed girl and very feisty and wants her way.
We still go 2 days a week to help out so Ramie can get some things done.  She has started working from home for about 10-15 hours a week.  She is one busy super momma.
So I have only shared this with a couple people, but this summer they will by moving away from us, but they are just going to Vancouver, WA or West Linn, OR (about 3 hour drive from us).  Brad has been promoted in his job and it is headquartered in Portland.  When I heard that and they wanted me and my sister to move down there too, it was a no brainer for me since my BFF lives in West Linn.  It is very complicated because my sister and I both own our house together and she doesn't want to miss out on the babies growing up, but her son (who she doesn't see often) lives here and then there is dad too.  So she may come too but she has a hard time making easy decisions. Lol...
The thought of moving is sort of overwhelming, so keep us in your thoughts and prayers that it all works out.  And now for pictures.

Bath time.  Look who might be our next soccer star.  (Justin) 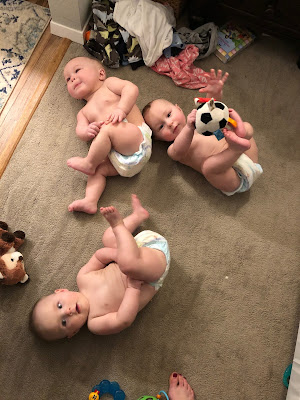 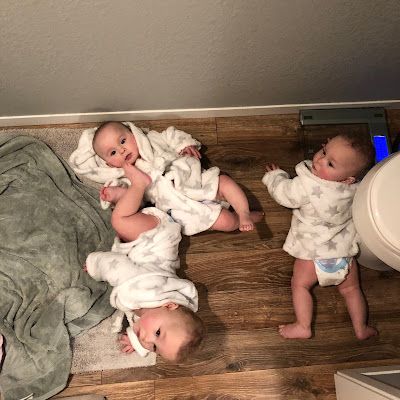 Anna with what looks like a hairy arm, but it actually one of the boy's heads. 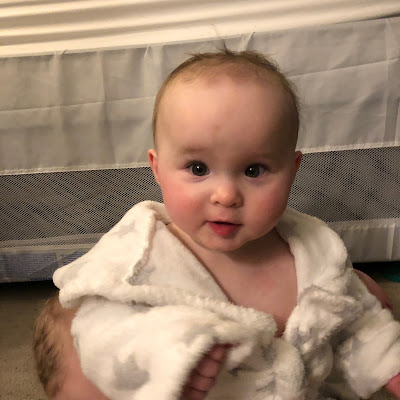 So, when we had all of that snow in February, they got them all dressed up and took them for a hike around the neighborhood.  They can hardly wait to take them hiking. They aren't going to let having triplets slow them down. 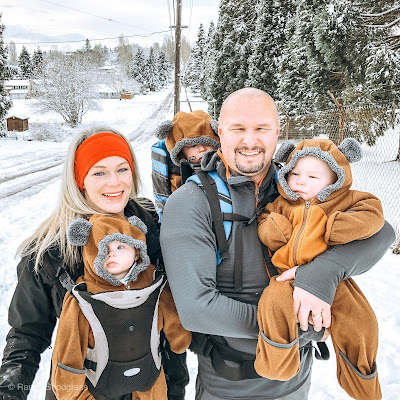 These were Ramie's Cabbage Patch dolls when she was little wearing clothes that the babies wore.  They try to always pose them in the same order:  Connor, Anna, Justin. 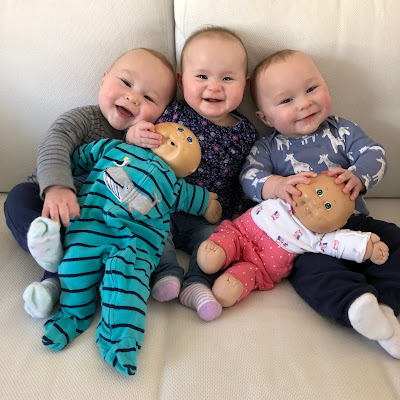 The little "Empress" as she is known and is starting to act like it.  It's cute now but wait.  If she wants something or you to pick her up she has this little or not so little screech that she does.  I guess they had their first dinner out with the babies, that Anna was not very happy and was creating quite a scene.  Might be time to leave the babies home when going for dinner.  HaHa…. 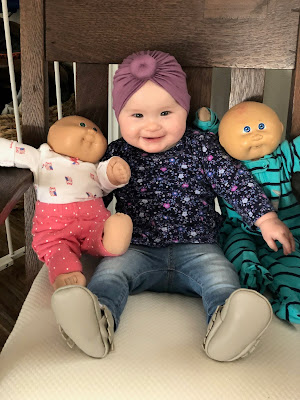 Connor and Justin broke free from the baby room.  They are on the move. 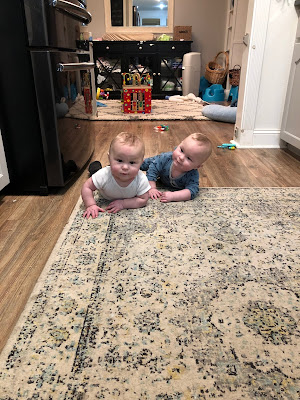 They just got a play yard for them and they love being in there with all of these balls.
And I'm not sure who is who in this picture.  My guess is Justin is in the middle and Connor on the right.  So much for putting them in order. 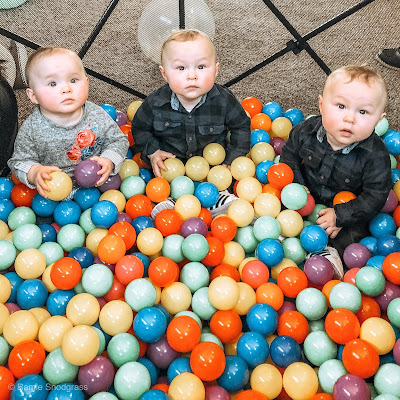 Aren't they so precious?
Connor & Justin. 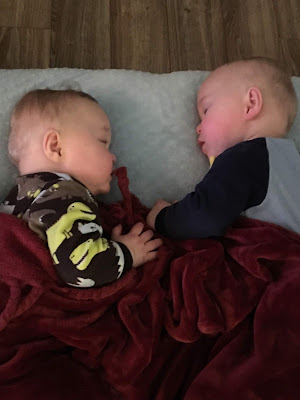 At Avery's soccer game last weekend.  Connor & Justin
They are finally interacting with each other. 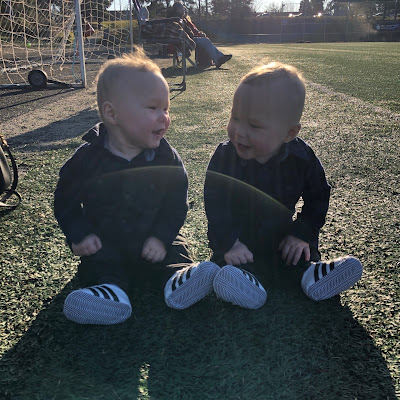 Dad and Justin (I think) 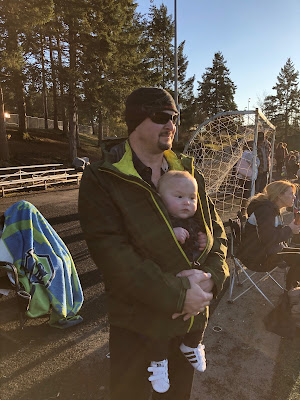 So, the day Ramie went into the hospital this set of triplets had been born and two were going home.  The third one had to stay in the NICU.  They have become friends and were invited to the boys' first birthday party.
And I can't believe that in 1-1/2 months our babies are going to be celebrating their first birthday. 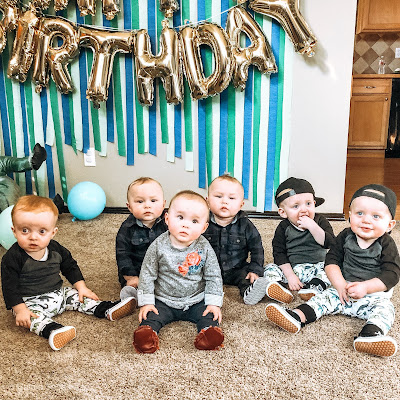 And last but not least, the boys are sporting their new headgear. They each have misshaped heads in the back so will have to wear these helmets for 2-3 months 23 hours a day.  Luckily they don't seem to mind them.  Now they can really go and not worry about their bumping their heads, but Anna could be in trouble if she gets hit by one or both of them.
Justin is left and Connor is right. 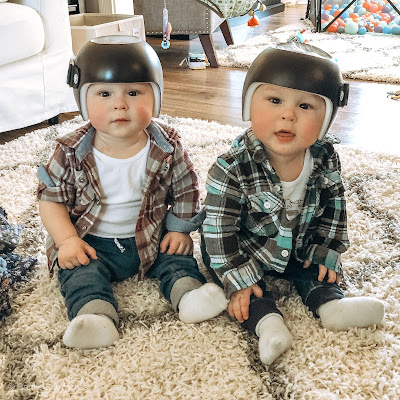 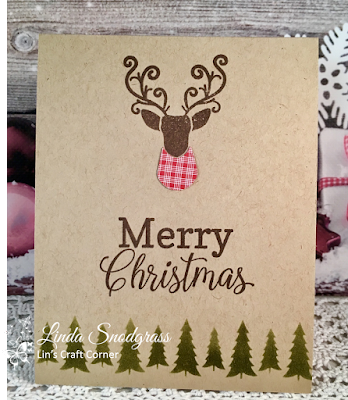 Another card for CAS Christmas

Come look at all of the inspiration created by our team and join us. 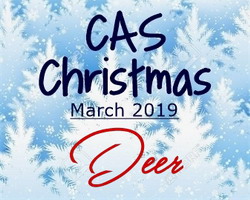 A couple cards for this month's CAS Mix Up
Stamping, dry embossing and embossing powder, colored with Copics for faux stain glass look 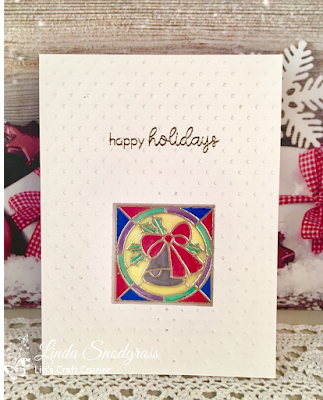 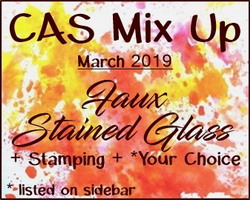 This month Susan would like us to use a Deer on our cards.  I decided to use this cute Wild Rose Santa and Rudolf image and colored with Copics.

Come join us at CAS Christmas

Welcome to our First Birthday Celebration.  Hard to believe that a year has already gone by.
Thanks for make CAS Christmas a success.  Join us and get your cards done early. 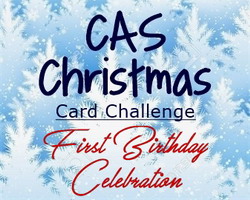 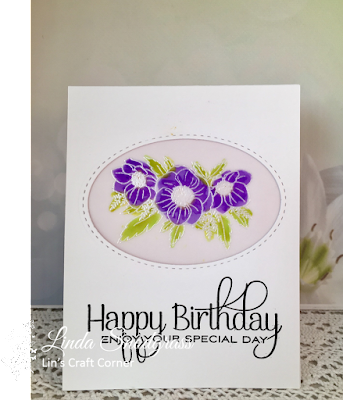 I am able to enter this card into 2 challenges.  Don't think I have played all week in my craft room so this is the only card I have made all week.
I used a NBUS stamp that has been sitting on my desk for a long time.
I embossed the image on Vellum with Hero Arts white satin pearl.  Then used my Distress Inks to watercolor.  Then encased it in an Lil Inkers Stitched Rectangle.
The sentiment is from PTI Think Big Favorites #24 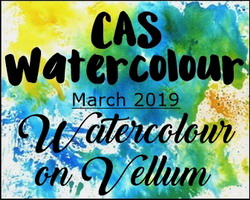 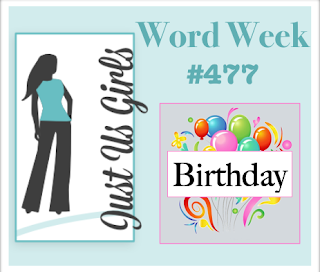 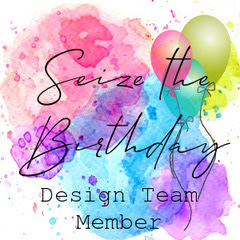 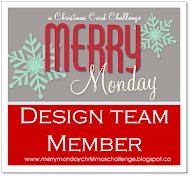